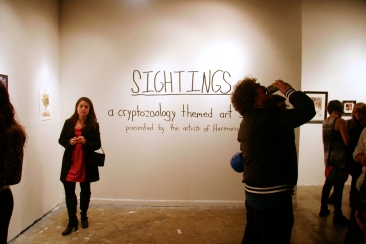 Everything in the show was so great but I think “Land Carp” by Dave Matheson, might be one of my favourites.

It’s hard to imagine what kind of work you might see in an art show with a theme like “Cryptozoology,” especially if you have no idea what Cryptozoology is.  As the Oxford English Dictionary defines it, Cryptozoology is,”the search for animals whose existence is disputed or unsubstantiated.”

To me, this means Bigfoot meets the X-Files.

Despite talking to some of the artists before the show, I still had absolutely no idea what to expect as I headed to the The Fourth Wall Project where “Sightings: A Cryptozoology Themed Art Show” opened on Friday, September 27th.

Featuring work by the artists of Harmonix a video game developing company based out of Cambridge, Massachusetts, The Fourth Wall Project lived up to it’s reputation as host to the kind of urbane and eclectic art it’s known for.

It was more like an art party, than an opening.  The vibe was laid back and cool.  The steadily growing crowd was professional and mingled excitedly as they saw and discussed each others work.  The art was vibrant, tactile and expressive with each piece encapsulating the theme of the show while expressing the uniqueness of the individual who created it.

“Sightings” is the third incarnation of the Harmonix group art show which is a company sponsored art show that debuted in 2011 at the Lincoln Art Center, and then moved to Voltage Cafe in 2012. “Previous themes have been Undo, Old School and this year is Cryptozoology,” said Skye Murrill an Administrative Assistant at Harmonix and the event organizer, “and it usually goes really really well.  Last year we had a gigantic response and were at capacity for three hours.”  This year it was expected to be even more popular.

“Sightings” did not disappoint.  As you walked in it was reminiscent of a Museum of Curiosities, you know… the kind where you might find a shrunken head or a Fiji Mermaid, and which can only be found when completely lost on back roads during a summer vacation.  There were Cryptids, a Jersey Devil, and a Chupacabra. The paintings, sculptures, water colours, and mixed media pieces that were hung around the gallery represented an amazing amalgam of materials, myths and folklore blended together with the vision and craftsmanship of the passionate and skilled artists whose pieces are featured as part of the show.

Being a creative professional always has its challenges, whether you’re working for yourself or working for a company you don’t always get to do what you want to do.  For the 38 artists participating in “Sightings” this show was an opportunity to break from working on the music video games Harmonix is most known for, (Dance Central, Rock Band and Guitar Hero), and produce work that is more personal and uniquely reflective of their interests. “A lot of what I do is about being a line artist,” said Josie Doggett an Effects Artist at Harmonix and one of the show contributors, “so doing something that is wholly my own is awesome.”

By 8 o’clock, the gallery was pretty packed.   People were enjoying the art, each other’s company and free beer.  While to the casual passerby some of the art might seem creepy or weird, or it might seem strange that people are standing around in what looks like it could be an empty store front,  the party was in full swing.

The show was pretty awesome.  While I remain impressed by the work I saw and the people I met,  perhaps what I find even more impressive is that a company is willing to support an art show for their employees as a community building activity.  To me, this seems like pure genius and explains why Harmonix is considered one of the best companies, to work for, in Boston.

But you don’t have to take my word on the art show if you don’t want to, you can always head on over and check it out for yourself or you can browse the gallery of images below. “Sightings: A Cryptozoology themed Art Show” will be up and open to the public at the Fourth Wall Project until October 4th.

Josie Doggett and her piece titled “of the Valley of the Headless Man”. What was amazing about her piece is that it isn’t one piece, but several different layers of wood stained, painted and sandwiched together to create this Native American art inspired sculpture.

As one of the two interactive art pieces this face was an endless source of amusement.

“Matogyaliaphobia” by Peter MacDonald. “I was thinking about doing a portrait of my daughter. I think when she’s sleeping she looks like an angel, but then I though of one of those old paintings of night terrors over the bed, and that’s what I did.” 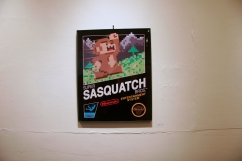 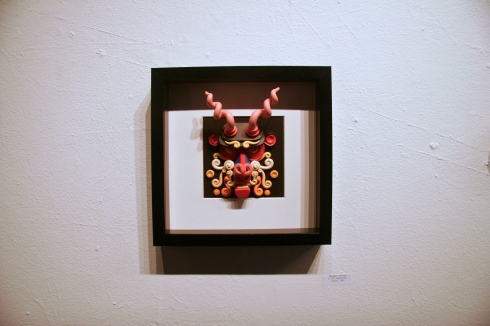 The second piece of interactive art, just got better as the night went on.

“series of five pieces based on Japanese folkolore, yokai with each piece inspired by Japanese animation.” Dawn Rivers 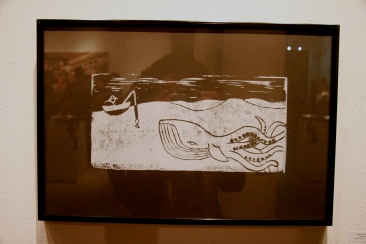 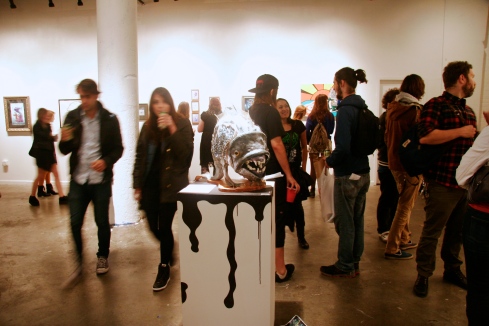 There was lots of drawing… 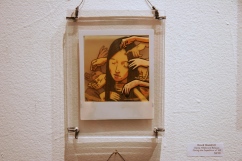 “As Yet Unknown” – David Goodrich 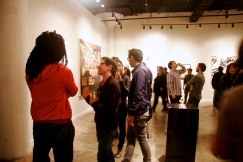 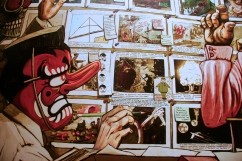 There is some amazing detail in this painting. Looking closely you can see all the typing and little details in the “history of the world” storyboards that the gods are meeting about. 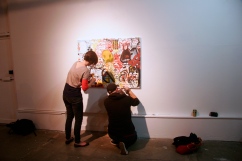 Everyone really loved this painting… and it was pretty incredible. 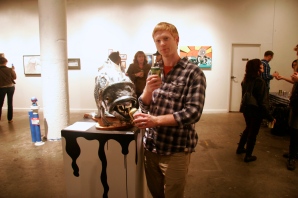 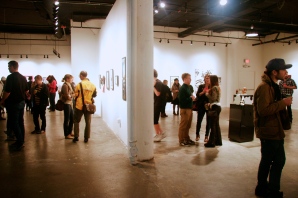 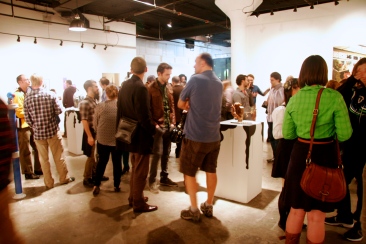 The Fourth Wall Project Gallery, is pretty cool, even if you’re just walking by.

Julia Swanson is a writer, photographer and multimedia producer.

Created by Julia Swanson in 2012 Four Letter Word is committed to exploring culture and innovation in the Greater Boston area and beyond.