Beer culture is diversifying and slowly growing in Lebanon. In a country where only one brand, Almaza, once dominated, entrepreneurs and companies are taking advantage of a burgeoning marketplace for brews. Existing microbrewery 961 Beer, which has been around since the war-torn days of 2006, has released new flavors and Almaza even recently debuted a strong pilsner, Al Rayiss. Kassatly Chtaura, known for its wine production, even introduced Beirut beer this July. The warm Mediterranean weather seems to finally have some counterparts worthy of cooling down on its beautiful days.

But we’re not here to talk just about beer. We’re here to talk about Colonel! It is the brand that really excites me, not just for the beer’s delicious taste and the diversity it brings to the scene, but the environmentally responsible and earnest entrepreneur behind it.

In a coastal city of Lebanon called Batroun, the windsurfing Jamil Haddad has made history (and refreshing brews) in the country. Named for the famous windsurfing spot in Haddad’s hometown, Colonel is not just any microbrewery in a micro (but growing) scene, but it is a one-of-kind green microbrewery/bar/restaurant, built with the architectural know-how of Nadim Sioufi and the knowledge of environmental genius  Ziad Abichaker (you can read more stories I wrote about him here!) Abichaker told me that it is not only the sole project like in Lebanon, but in the entire Middle East.

The brewery is imported, a combination from Germany, Czech Republic, Austria and Belgium, but all the brewing is done at the site in Batroun, mere steps from the waves. Haddad has always had a passion for beer, something he said came naturally from growing up in Batroun.

He was a sales and marketing representative for Adidas for over seven years, using all of his vacation to visit microbreweries in Europe and practice making beer. He started with liqueurs and after six months of experimenting with beer, he finally brewed a great-tasting one. “I thought, ‘Now we can do something,” Haddad said. 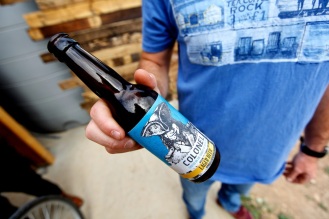 Jamil Haddad holds the Colonel prototype that visitors can take home with them. This is the only beer being sold outside of the microbrewery. Photo by Osie Greenway 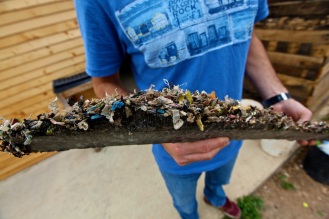 Jamil Haddad shows the inside of an Eco-Board. Photo by Osie Greenway

Haddad sold everything to finance this project, including his car and his sailboat. He took out a loan and gambled everything on a dream. It seems to have definitely paid off. It is inspiring to see, the way he is living his dream.

Overlooking the sea toward the famous Colonel surf spot, he said, “This is it. This is a dream. To move back, to sit here, don’t have pollution, it’s quite calm, you feel that you are doing your dream. The dream is coming true now. This is it. We live to have what we want, it’s happening.”

And the dream is green! The building is made entirely from recycled material, aside from the steel beams, including recycled wood pallets and Eco-Board. Inside and out, the furniture making up the different sitting areas are a eclectic mix, the laid-back vibe making you feel more like you are in a friend’s backyard rather than a restaurant. This durable material was designed by the Abichaker’s Cedar Environmental team and made from plastic bags. By using this to build the structure, the NGO has recycled over two million plastic bags.

I originally wrote a story before the structure was completed, and I was so happy that when I got back to Lebanon, it turned out as good as Haddad had explained. Though there is still much work they plan to do, it looks great and will surely grow, along with the business. The motto for construction was, “Nothing goes to waste,” a fact that can be seen from the décor to the vegetation on the walls.

Change in Lebanon depends on the will and ingenuity of the people, and there is plenty of that to go around in Lebanon. As long as there continue to be people around like Haddad and Abichaker who are willing to push boundaries, whether it’s in a glass or composed of plastic bags, no matter what the political and security situation is in Lebanon, there will be people making this country a better place to live.

You can read more green initiatives in Lebanon from my article for Al-Monitor here: http://www.al-monitor.com/pulse/originals/2014/04/recycling-lebanon-initiative-waste-problem.html

You can also check out Colonel’s website at: www.colonelbeer.com

The finished product! Colonel at night. Photo by Melissa Tabeek 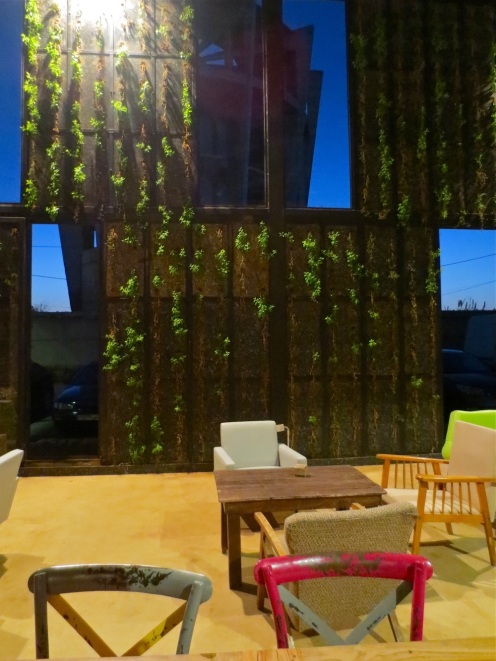 The interior of the microbrewery. Photo by Melissa Tabeek

The four beers on tap. Photo by Melissa Tabeek 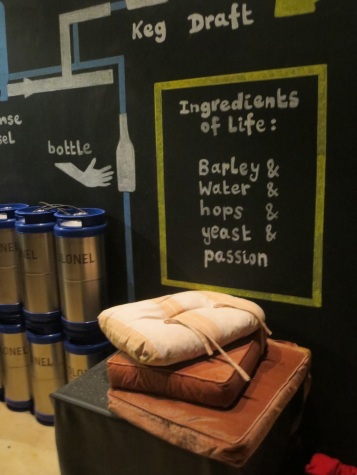 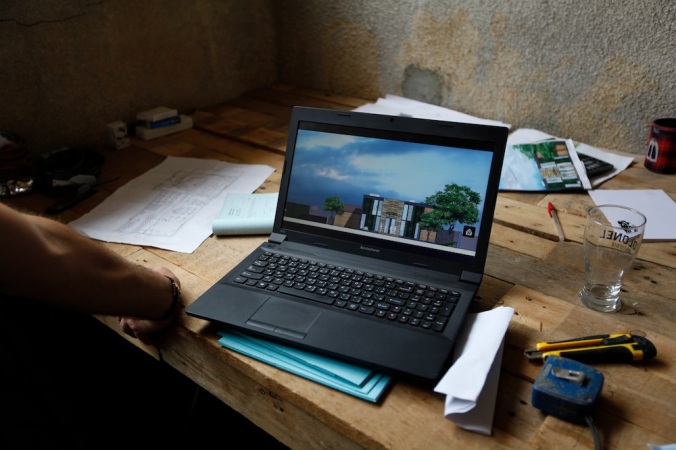 Mock up of Colonel microbrewery. Photo by Osie Greenway 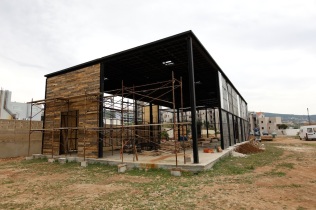 The view of Colonel under construction in May 2014. Photo by Osie Greenway

How the beer is made. Photo by Melissa Tabeek

Colonel microbrewery under construction in May 2014. Photo by Osie Greenway

Overlooking Batroun and the famous “Colonel” spot on the Mediterranean Sea. Photo by Osie Greenway

Melissa Tabeek is a freelance journalist based in Beirut, Lebanon. She reports on politics, culture and social issues in the Middle East. On her website, you can also find her blog, where she writes about her work and daily life in Lebanon. She holds a Master of Arts degree in Journalism from Northeastern University. View all posts by Melissa Tabeek